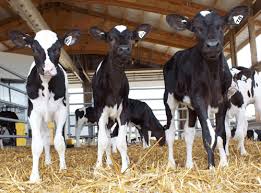 A project by The Ohio State University and University of Wisconsin-Madison, funded through CDC’s Antibiotic Resistance Solutions Initiative

The publication can be found at: Genome Divergence and Increase Virulence of Outbreak Associated Salmonella enterica subspecies enterica serovar Heidelberg

As the weather warms, there has been an increase in bovine cases of MDR Salmonella enterica subspecies enterica serotype/serovars Heidelberg.  In addition, the CDC has reopened their investigation into the multidrug resistant Salmonella ser. Heidelberg due to new human cases. Since December 2017, the WVDL has isolated this MDR Salmonella ser. Heidelberg strain 10 times from bovine fecal or tissues samples. This is a gross under-representation of the amount of disease. From these isolates and isolates from previous years, we have noticed a regional difference between the two dominate PFGE patterns.  The JF6X01.0523 strain is most commonly associated with the Midwest or animals originating from the Midwest.  This strain is the more virulent strain and more common, whereas the JF6X01.0590 strain resides in the southeast and has demonstrated less mortality.  There is ongoing research to understand the virulence differences between these two PFGE patterns as they both contain the same MDR genes.  The WVDL continues to work with our state and federal counterparts to understand this outbreak, which has been occurring since 2015.

In light of the outbreak that is going on with Salmonella ser. Heidelberg, the WVDL would like to keep our clients aware of the serotypes and serogroups identified at the WVDL in 2017. Salmonella enterica subspecies enterica contains greater than 2,500 different serotypes, also called serovars.  Each serotype is identified at the WVDL using various sera that bind and agglutinate if a particular molecular pattern is present on the surface of the Salmonella bacterium in question.  These agglutination reactions are run and positive reactions are used to first group (Group A, B, C1, C2, D1, E1, and G) the Salmonella isolate and then serotype it to identify a specific serotype name such as Salmonella ser. Heidelberg is in the Group B along with Salmonella ser. Typhimurium.  Read More …

Cold weather has arrived in the upper Midwest. Calf raisers know that cold temperatures increase the calf’s maintenance requirements for energy, but many do not know that the maintenance requirements also increase for protein and fat-soluble vitamins if the calf is ill from conditions like scours and pneumonia. Optimizing nutrition of sick calves can make the difference between a dead and a healthy calf.  Read More …

The WVDL and our state and federal collaborators would like to remind veterinarians and producers to use caution when working with animals with confirmed or suspected multidrug resistant (MDR) Salmonella enterica subspecies enterica serotype Heidelberg.   Read More …

A multi-state outbreak investigation that began in July 2016 after a 16-year-old boy became ill after buying calves for a 4-H project has been re-opened by the Centers for Disease Control and Prevention (CDC). As of August 2, 2017 there have been 46 confirmed human cases of MDR Salmonella enterica subspecies enterica serotype Heidelberg reported to the CDC and other local health officials, with ten of these cases reported since April 2017.  Read More …