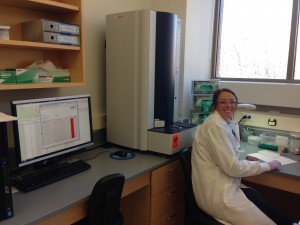 The Microbiology Section at WVDL has been using a MALDI-TOF machine to rapidly and accurately identify bacterial pathogens for several months now, starting in the spring of 2014. MALDI-TOF is a matrix-assisted laser desorption ionization/mass spectrometry machine that identifies bacteria based on their unique signature.   Along with the usual pathogens the MALDI-TOF unit has been identifying several emerging bacterial mastitis pathogens, such as Lactococcus garvieae, which is aiding bovine veterinarians to improve milk quality and profitability on Wisconsin Dairies.

Contact the WVDL if you receive a culture result with a microbial species that is new to your practice for more information.

The following is a recent article from Veterinary Microbiology highlighting the MALDI-TOF’s ability to speciate hard to identify Corynebacterium spp.