Archive for the Outreach Category

Feature Story on WVDL as Wisconsin’s Only CWD Detection Lab

The WVDL’s preparation efforts ahead of this year’s influx of CWD samples is highlighted along with Pathology Sciences Supervisor Dan Barr, who oversees the TSE lab. The full article can be read at the following link: https://madison.com/ct/news/local/govt-and-politics/state-s-only-cwd-detection-lab-ramps-up-preparation-efforts/article_2db7589c-f5bb-5be5-bae3-d1b843f23823.html

“Heidelberg is the worst we’ve seen so far.” 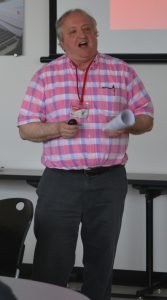 Swine Testing Requirements for Entry into Wisconsin Changing as of Feb 1.

Swine Requirements for Entry into and within Wisconsin Changing 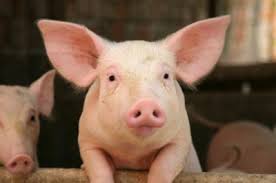 The testing requirements for swine entering Wisconsin will change beginning Feb. 1.  Porcine coming into Wisconsin (and/or moving within the state) will have to be tested for both Porcine Reproductive and Respiratory Syndrome (PRRS) and Swine Enteric Coronavirus Disease (SECD).

Beginning Feb. 1, 2018, WVDL will offer PRRS ELISA and SECD PCR testing on oral fluids.  SECD PCR tests include porcine epidemic diarrhea virus (PEDV), transmissible gastroenteritis virus (TGEV) and swine delta corona virus (SDCoV).  Only rope extracted oral fluids will be accepted as an appropriate sample type for these tests. This is what you need to know:

Sample Collection: A minimum of 5 ml of fluid is required!!  Samples of oral fluids can be collected from individual pigs or collectively from pens by hanging ropes.  An oral fluid sample is derived from a pen of pigs (representing up to 30 animals), where the pigs are allowed to chew on a length of undyed, unbleached cotton rope specifically made for oral fluid collection.  Once the oral fluids are extracted from the rope, oral fluid samples should be immediately refrigerated and shipped to the laboratory for testing.  Samples should be sent chilled on ice packs, not frozen.  WVDL will offer swine oral fluids collection kits at $5.25/kit, which contain all items required to collect samples and prepare them for refrigerated packing and transportation.   Click on this link to fill out and submit your order for these kits: The Swine Oral Fluid Collection Kit Order Form.

The Department of Agriculture, Trade and Consumer Protection (DATCP) issued a ‘Livestock Health Alert’ last week regarding changes to swine testing requirements for animals entering Wisconsin and moving within the state.  The full release can be read here.

The Wisconsin Veterinary Diagnostic Laboratory would like to thank everyone who asked for test kits and submitted samples to us for our developing Pink Eye Panel.

We have sent out all the kits we had planned on disseminating and so we are NOT sending out any more materials for sample collection.  If you have received one of our kits, please do continue to submit samples from the materials we sent out.

Please contact us with questions and thanks again for your help.

(Note:  Beth Pfotenhauer is a microbiologist with the Wisconsin Veterinary Diagnostic Laboratory.  She is actively involved in community service and has recapped her most recent outreach involvement with the “School Makes a Difference’ program.)

What do a Charter network supervisor, the owner of Chick-Fil-A, the City Clerk (bottom right) and a WVDL microbiologist (top right) all have in common? We all spent our Thursday morning with two eighth grade classrooms at Hamilton Middle School. On Feb.5, I had the great pleasure of participating in the Madison Metropolitan School District outreach program called “School Makes a Difference” (commonly known as career days). As a representative of the Wisconsin Veterinary Diagnostic Laboratory, I brought in lab coats, gloves and safety glasses for the students to try on while a few student volunteers extracted wheat germ DNA (below). We discussed what “diagnostic work” entails and how it affects Wisconsin farmers.

During this outreach we shared how our school journeys had led us to the jobs we have today and the decisions in school that guided our personal growth. We also gave the students sage advice about the difficulties of owning a business, the importance of being polite or practicing good customer service, the power of voting, and tools used for correctly identifying disease and sickness in animals. The students had a lot to think about, but were also encouraged that their passions as well as weaknesses should guide the classes they choose for high school and post school success. Who knows—we may have an inspired future WVDL employee in the makings. 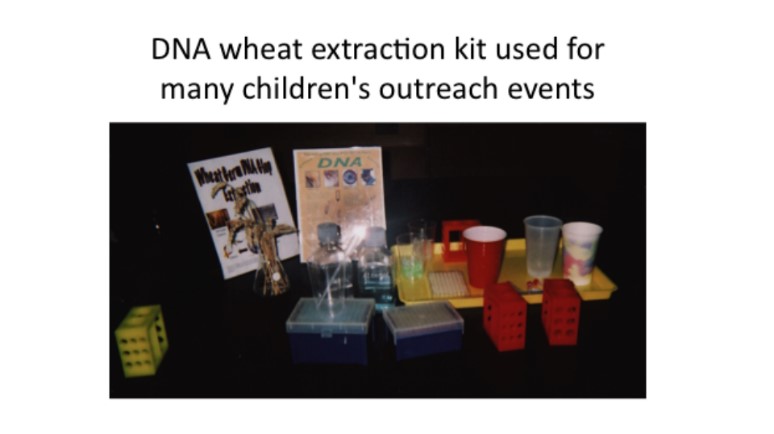 Dr. Cindy Bell, DVM, DACVP, will be speaking about backyard poultry medicine at the Wisconsin Exotic Animal Veterinary Conference on March 1st, 2015 held at the University of Wisconsin School of Veterinary Medicine.

Dr. Bell’s lecture will be an interactive case-based lecture that discusses some of the most common health issues in backyard flocks, including enteric disease, respiratory disease, reproductive issues, and skin conditions.  Dr. Bell will answer questions regarding husbandry, vaccination, parasite control, predator control, and nutrition.

If you attend the lecture, stop by and say hello to Dr. Bell! 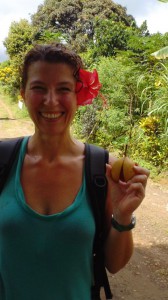 Allison on a hike. She is holding nutmeg from the Spice Island (what the Island of Grenada is called) that has just been picked.

Finishing up her eight-week training project at St. George’s University on the Island of Grenada, Allison Klein has had an excellent experience and is ready to come home to Madison. Allison is a histotechnologist at the WVDL and has been helping train a new histotechnologist in the Pathology Department at the St. George’s University Veterinary School.
Allison reports the training has gone very well and the H&E, along with new special stains, look great heading off to the pathologists. One of the problems they have had is getting the microtome fully functional. Staff has been hampered by significant time delays in receiving new shipments of replacement parts and blades to the island of Grenada, which is near Trinidad and Tobago.
Klein says, “I’ve learned a lot about not only histology, but also about the island and the people that live here. I’ll be excited to tell you all about it when I get back!” 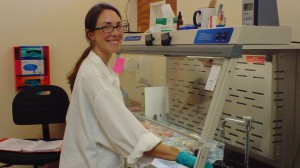 Jessica Holland, a Medical Illustrator at SGU, is being trained in histology techniques at the hood. 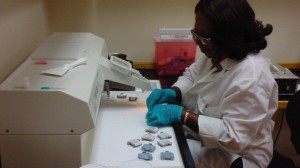 A new histotechnician at SGU, Veronica Alexander, is shown here at the embedding station. 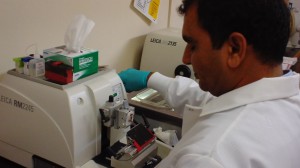 Dr. Sockett will be a program speaker at the Bovine Veterinary Nutrition Conference at the Purina Animal Nutrition Center in Wildwood, Missouri this week.

Dr. Sockett’s talks focus on diagnostics for calf health problems and stillbirths. The conference is October 28th-30th, 2014, and will feature a combination of lectures, discussion groups, and industry updates.

WVDL’s Klein on Assignment to the Island of Grenada 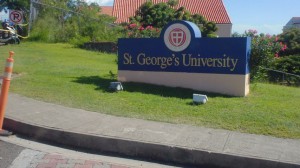 When the lab becomes operational, they will support a biopsy and necropsy case load. The caseload includes research work and mostly dogs with a mix of cats, small ruminants, chickens, pigs, terrestrial wildlife, and marine wildlife.

Stay tuned for updates and pictures from Allison’s extension assignment.

WVDL Booth Is a Hit at Science Expo 2014

Recently, several WVDL staff members took their expertise outside the lab, taking part in Science Expo 2014.  One of those participants, WVDL microbiologist Beth Pfotenhauer, recounts that day below. 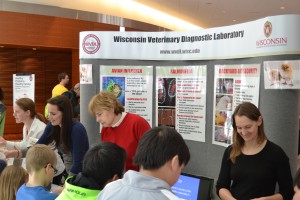 Science Expo 2014 is a tremendously busy event with hundreds of families and excited kids running every which way with goopy substances in tubes and huge smiles on their faces. The enthusiasm of the many visitors to our booth reassured me that our collaborative efforts successfully engaged our audience and taught them just a bit about bird and human health.

Kids threw themselves into stuffing our yarn “RNA” Avian Influenza genome pieces into the balloons and creatively decorating their own interpretations of the Hemagglutinin and Neuraminidase binding proteins with colored sharpies (only a few popped).  Kristin was impressed by the advanced knowledge base that the middle school students had already knowing about viruses and human DNA. This made it easier to explain Avian Influenza in more depth. She also thought it was cute how a number of the younger children, when asked if they had ever been sick, replied “no.”

In the bacteriology section, the young science minds decoded Salmonella serotypes and learned premises of the “serious” strains. Some kids had very good questions. Those who had heard about Salmonella before and had backyard birds were interested to learn that not all strains of Salmonella are problematic for humans. They also were amazed at how you can use serotyping to trace back to where an infection started.

On the far end of the table in the pathology section, Jeopardy was a hit with testing the participants’ knowledge of bird-human health facts. It seemed that our wonderful Duck-Dr-Bell, satisfied many participants’ curiosities and concerns over their own or neighbors’ back yard birds. Dr. Bell noted “It was energizing to see the diversity and depth of science on campus all involved in the larger event and every one’s participation to make their science accessible.”

We had an abundance of game options, and only so much table space. But for a select number of visitors, their scientific curiosity and understanding led them to the “harder games” where brother and sister and school mates raced each other to put all the “components” of PCR together. My favorite experiences were when the parents following their kids also had enlightenment moments of “aha, you guys test for Avian Influenza that way…hmm…interesting.”

A great insight by Kristin shows the heart of successful outreach engagement. “The viral particle balloon activity was easily modified depending on the age and understanding of the student. I really enjoyed asking questions to determine where approximately the student was at, and then attempt to modify my explanation to help them get something out of it.”

I believe we all made great educational moments for these kids and would characterize our outreach event as a success. We made the public aware of our role as diagnosticians in Wisconsin and on campus, and gave kids an interesting spark into the world of avian microbes and bird health precautions. Based on the number of balloons we went through, over 120 kids (plus their parents) visited our station and seemed to enjoy themselves immensely.